As artist we live mostly surrounded by incomprehension of various varieties. Sometimes there is disdain and resentiment or pure philistine disgust for someone who dedicates their life to the pursuit of a private vision. This article reinforced this notion.There is a happy end to the story:at least over time the writer met me half way .

Martin Mugar at New England School of Art and Design
KATE LEDOGAR
A few summers ago, my sister and I took a week-long class with Martin Mugar at the Fine Arts Work Center in Provincetown. It was a sort of paint-what-you-will situation. Mostly, I was just happy to be out at the beach, surrounded by fishermen and drag queens, and eating lots of Portuguese pastries. I gave the painting I was working on a sort of good-natured, half-hearted attention. OK, I dabbled. The only part of the class that truly caught my interest was Mugar’s slide show presentation of his own work.
At that time, he was painting dots: vaguely patterned, and in a few repetitive colors. His slides—which spanned a good 25 years—traced his development from exceptionally lifelike figurative works, to a transitional period where he broke down the subtle colors forming surfaces, to the dots-only approach he currently practices.
In my own painting experiences, there were instances where I found myself nearly mesmerized by surfaces. Expanses of walls and skin started breaking down into moving particles of color the more closely I looked at them. Eventually, I felt unable to reproduce their colors at all. In Mugar’s interim paintings—which fell stylistically between the realism of his early work and his most abstract canvases—he was painting surfaces as I saw them, and doing it well. His paintings gave me a mixed feeling of awe and resentment by showing me that it was possible to do what confounded me.
His current paintings interested me less. I was suspicious that he had worked into abstraction in order to appear more contemporary in style. Plus, I was probably too distracted at the time by the promise of some local delight (perhaps a late afternoon "Doggies in Drag" parade) to give the matter much further attention.
Now in the bleak of winter, up from the slushy, grey streets of downtown Boston, I'm in a much more focused frame of mind to view Mugar's paintings. Along for the trip is my sickly boyfriend, who wanted to get out of the house.
In the small pass-through lounge/gallery at the New England School of Art and Design, Mugar's paintings look like sherbet-colored globs of icing on the wall—something that a little kid would like to eat. They consist of large globs of paint in bright, chalky hues repeated in different combinations on rectangular and square canvases. I watch the sickly boyfriend out of the corner of my eye. From the abrupt way he stops in front of each painting, gives it a couple of seconds, then moves onto the next, I can tell that he's decided he's been duped. He says, "Well, when you seen one, you seen 'em all, right?" and slips out into the hallway to look at the student assignments pinned to the wall.
But Mugar’s paintings are meant to be gazed at for extended periods of time; they offer a sort of mute conversation for the eyes about the act of looking. The paint sticks out a good half-inch from the surface; pastel smears poke out from the sides and drip off the bottom. This texture buildup creates a topographical landscape that would challenge an ant trying to get from one side of the painting to the other. Due to the subtle variations of color, each painting—though similar to the ones on either side of it—offers a unique visual experience.
After studying them closely, I no longer think that Mugar's abstract works are contrived solely to attract attention—in fact, just the opposite. I suspect these paintings represent an obsessive attention to sorting out a visual "problem" that fascinates Mugar, which he has pursued whether galleries and critics notice or not.
If you visit the show, I recommend that you visit Mugar's website (www.martinmugar.com) beforehand—it gives some good context and background to appreciate his work.
MARTIN MUGAR’S WORKS WILL BE ON DISPLAY AT THE NEW ENGLAND SCHOOL OF ART & DESIGN THROUGH 2.5.06. 75 ARLINGTON ST., BOSTON. 617.573.8785.


Here is a recent example of stupidity: I was accepted into a group show into a NY gallery (First St Gallery)  only to be told to remove the painting ASAP after it was dropped off.

The late Addison Parks's blog was always worth reading: Especially this response to de Kooning's letter to the editor written upon the death of Arshile Gorky 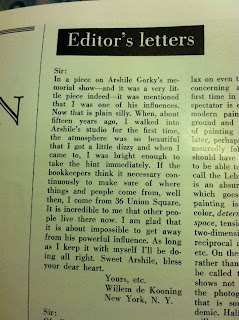 here is a recollection of Addison
https://martinmugar.blogspot.com/2018/06/my-recollection-of-addison-parks-will.html
Posted by Martin Mugar at 8:44 AM No comments:


link to my book on Amazon

To say as I did earlier that I learned most drawing techniques on my own is true only in part. In some cases what teachers conveyed often in passing only made sense years later. Or there was something in the professor’s own work that was unclear to me at the time. This was particularly the case with Al Held, whose mid career work was for the most part unknown to me when I studied with him at Yale. It generated its energy by reversing figure and ground thereby upsetting our normal relationship to the world, where we are interested in the objects in front of us not the negative space behind it.  Someone who gave me the facts like Sergeant Joe Friday in the TV show ”Dragnet” ("Nothing but the facts Ma'm")was Erwin Hauer sculptor professor at Yale, whose architectural screens from the 60’s are being rediscovered. He conveyed to me how in sculpture to express the pneumatic aspect of living beings. It all started in his figure sculpture class where my initial efforts to sculpt showed no respect for the surface tension of the human form in the clay model. He kept repeating that representing what is seen on the surface is how you understand what is underneath. He told me to abandon the figure sculpture I was working on to sculpt a rhinoceros thighbone , a relic from the zoology department. Continuity of surface became the mantra as he had me physically touch the contours of the bone to feel the movement of the surface in space.