The Pastorale  There is even a brief comment from Jed Perl 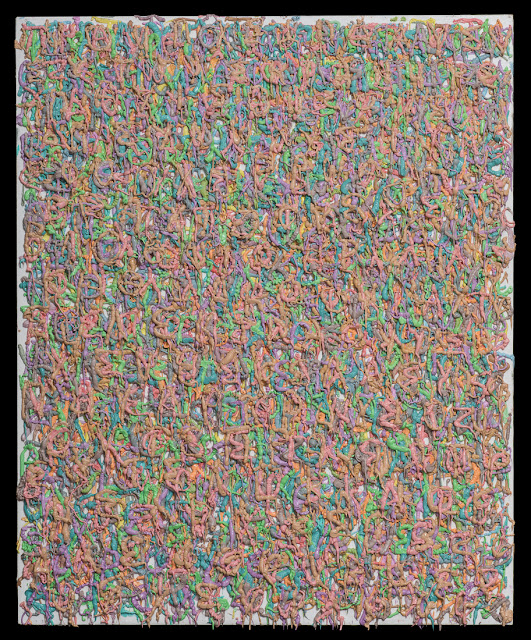 Laura Owens and the New All American Century

A few years ago I wrote a blog that covered in part the “Forever Now” show at MoMA ,which included Laura Owens, although I did not single out her work for comment. The catalog essay accompanying the show tried to establish a shared gestalt of the exhibit's participants based on the Internet culture we live in. For the author it were as though all the dynamic dialectics of American Art of the last half of the 20thc had come to an end and were replaced by a sort of neo-liberal endlessness in the style of Fukuyama’s  “End of History “: the Cold War was over; Western Capitalism had won and globalism and its factotum the Internet were destroying any hierarchies in a global race for infinite efficiencies.

I was intrigued by David Salle’s recent essay on Owen’s in the “New York Review of Books”. Its effusive praise seems intent on lifting her out of any cultural critique as for example the one Salle himself partook of back in the 80’s or the internet cultural thesis of "Forever Now". Salle glorifies  her “can-do” spirit. He sees her as a quintessential american pragmatist. If someone like Robert Longo, along with Salle, part of the Neo-Expressionist movement of the 80’s, drew businessmen in free fall, it embodied a critique of rampant capitalism in a period where one might still be horrified by it. The experience of “Free-Fall” is what Salle loves about Owen’s work. But it is more of the country fair roller-coaster variety.

In Schjeldahl’s essay in the “ New Yorker,”entitled “The Radical Paintings of Laura Owens” he creates an ”Aw-schucks” image of her as an unpretentious Mid- Westerner.  She is described as spunky and in a canny fashion having moved through high-end art academies like RISD and CalArts without submitting to their dogmas. Like Salle he sees her as leaving behind the dialectical critique that tied the work of Rubinstein’s Provisional painting antithetically to Modernism. She appears to benefit from a loosening of Europe's hold via postmodernism on contemporary art with a hearty embrace of American pragmatism as the philosophical zeitgeist of a New American art. The language she employs in her work fits into the distinction I made on Twitter about the relation between the Provisionalist painters and late Stella.  In Stella’s work early and late there is an intentional  schism created between its material and any reference to the optical world that still remained in the Abstract Expressionists. Everything becomes "materiel"and the visual is sort of color-coded and the imagery is not so much abstract as just signs and symbols.  These are the bits and pieces with which Owens pieces together her new artistic world. Imagistically she makes direct quotes from the later Stella. Whereas Stella yearns for the overall dynamic of the Baroque, Owen’s goes far beyond the bas-relief that Stella adheres to. So there is a doubling of the detaching of the retina in the work of Owens and at times an exploding of the idea of painting into our physical space in a way that Stella never achieved. And whereas every move Stella made came out of a certain machismo to leave mood and gestalt behind, Owens using this imagery coming from various media, the internet and graphic design ties everything up with the language  children’s books with not an ounce of Camp.

Salle uses “gestalt” and the lack thereof in Owens’s work as a "mot-clef," with which he hopes to unlock the secrets of her work. According to Salle it was an obsession with gestalt that underlay the teaching at the schools she attended: the Modernists at RISD or the Conceptualists at CalArts. Parts have to add up to an idea; you could have heard the same story in the ”Pit” at Yale, parts/whole, mastering black and white before venturing color. But Owens survived all that macho bullying and kept a certain predilection for play alive in her work, a knack for how to mix and match or as I once described it in “Shake and Bake”.

Salle does express some reservations about the notion of the role of an anti-gestalt in her work since one could say all art has some sort of over-all-ness: try as you may you can’t escape meaning. Even ZombieFormalism with its squeezing out of any mood or feeling in Guyton’s inkjet work is still a selection of parts that create a whole even if the mood is in its absence of mood. A better conceptual framework with which to package Owen’s work would have been to use anthropologist Levi-Strauss’s “Bricolage” defined in English as tinkering. It was a way of putting together a cultural structure  as a sort of mish mash typical in so-called primitive societies not dominated by monolithic scientific schema.  The postmodernist Derrida latched on to the notion of bricolage to make a point of the possibility that even in the monolith of Western scientific culture we are doomed to function in the manner of bricolage. We are always already in a culture, defined by it, swimming in it so to speak. But each response to it takes place in time looking back hermeneutically as well as being in the present and is subject to distortion. We end up with something that is not homogenous. Salle’s work from the 80’s fits perfectly into that construct. It is a commentary on our mediated Warholian existence, where we are not sure where our physical self ends and the world of the media begins. The media sends us mixed signals from Sesame street to pornography all at the same time.  I recall the zeitgeist of that time from a talk Robert Longo gave at UNC-Greensboro in the early 80's: The subject of his speech was basically a self-indulgent rant about who came first the Euro trash Neo-Expressionists or the New York Neo-Expressionists. At the end of his talk he stated that just before he draws his last breath his last thought he will be: “Eat at Burger King”. Succinct postmodernism. Owens is post-postmodern. As she does not want to squeeze everything into the same procrustean bed, she lets things lay side by side with ambiguity. Salle  thinks ambiguity is a mot-clef in understanding her work. It allows him to make the point that ambiguity is not irony, the gestalt of the postmodernists that he came out of.

What Salle is getting at is her abandonment of a gestalt as a totalizing meaning. He says her espousal of ambiguity arises from images being sourced from different media all put in the same space that may agree or not agree with each other. Or referencing something other than what their sources imply. Salle refers to her as a space alien who is strangely out of touch or detached from our culture but because of this may function as an effective cultural critic. She has no skin in the game and can be even-handed about her relationship to popular culture. The only popular culture is the culture of children's books she reads to her kids. She is not a critical theorist from Frankfurt, angry at our culture for its superficiality nor bitter for it mediating and totalizing so much of our lived-life. Maybe thinking along with the anthropologist Levi Strauss we could see her as the creator an American cargo cult out of the bits and pieces of our cultural detritus. I noticed this tendency in the semiotics of David Row that is built out of citations of other painters. That would bring her in by the backdoor to a kind of gestalt. But just as she pieces the parts together in a funky mix of objects in a hybrid of sculpture and painting it is up to us maybe to make further connections to come up with our own interpretation.

She told Schjeldahl of a list of dictates she wrote up to aspire to as an artist when she was in her early twenties: among them were “Think big,” “Contradict yourself constantly,” “No Guilt,” “Do not be afraid of anything,” “Know if you didn’t choose to be an artist-You would have certainly entertained world domination or mass murder or sainthood.” I would say they are a pretty good description of where she exists with her work today. She thinks big with her New York gallery scale work but not very deeply. She can easily contradict herself since any position she holds means so little to her, it can be easily changed. I would love to be a person without guilt but how can you live and love among others without at least occasionally feeling you are not fulfilling your own expectations or the expectations of others (though I’ll admit she may just be referring to painting not human relationships). And if you think art is keeping you from indulging in mass murder, maybe your art should be a self-aware exploration of those dark desires.

The post-modern view implicates that we are always moving away from our origins, yet even in the continual distancing from the origins something of the source remains.  Like Stella Owens says: what you see is what you get. There is nothing beyond the work itself that the work might point to. Anything that might upset the applecart of her manufactured world is kept at bay. For me the disparities the mix and match of the real and the printed are already well covered by Rauschenberg.

The description of Owens I get from the two articles made me think of my mother a nurse in the Navy during WW11, whose favorite compliment was to call someone a “real trooper”, someone who pragmatically knew that things had to be done and there was no time to overanalyze details or motives. Yet even she knew that the realm of pragmatics did not apply to her relationship with nature, that offered her a refreshing sense of belonging.  She knew that she was more than an object maker or as Barnett Newman said not just an object among objects. Even Salle back in the day,had a touch of strangeness of cultural weirdness and disparities, e.g. the weight of pornography on the mundane. A lot of it did not add up but that void he created had a touch of the spiritual. Where does all of Salle’s neo-expressionistic culture clash end up: with Laura Owens ! whose work has all the Aw-shucks banality and mild irony of a Grant Wood.*

n.b The article written by Carl Kanduch on Abcrit shares a lot of the same points as this essay. And resulted in several people being blocked by Roberta Smith on Twitter.

*In a comment below someone claims that I misjudged Grant Wood who has a dark streak in him. All  I see is irony at the most and that could be shared with Owens.There is now a retrospective of his work at the Whitney.Is it ironic that it follows Owens?