Artists without faces. Or what do you hang your hat on? Jean Gabin, Cecily Brown, Dana Schutz and John Currin.

Artists without faces.
Or what do you hang your hat on?
Cecily Brown, Dana Schutz and John Currin.

"We had faces then." Words that describe the Hollywood actors of Gabin’s era: Cary Grant, Humphrey Bogart, Kirk Douglas, Greta Garbo and Marlene Dietrich to name a few. What does it mean to have a face? A sense of fate etched into the face, when you accept the persona which is one part what life casts across your bow and the other part  how you deal with it. Maybe grounded in the singularity of Christ’s body and face on the cross as he fulfills his unique destiny/apotheosis in a discrete moment in time. Or the heroes and heroines of the Iliad born to families that already doom them to a fate beyond their control. Does not apply to Tom Cruise, Leonardo DiCaprio, who still looks like to me the pre-adolescent he was one in “What’s Eating Gilbert Grape”. Too much a baby face to my taste for his gangster roles and Johnny Depp who always intrigued me with his performances in “Ed Wood” and “Edward Scissorhands” is not growing old gracefully. Unlike Gabin he won’t find a role  for an aging personality that Gabin created in “The Dominici Affair”. Nor will Jim Carrey transcend his iconic roles in “The Truman Show” and “The Eternal sunshine of the spotless mind”.  In this postmodern age the self is dischargeable, it carries not burden of debt;  it has no beginning, middle and end. Things seem to bog down in the middle. We are more Buddhistic now! Or transcendental meditators like Carrey. …In our culture if our image is no longer pretty to the public then we had rather euthanize ourselves than seem less than perfect. OK, acting is a job and your face is what you sell. But there seems to be a way that some careers transcend that purely mercenary definition. Their way of persisting to the bitter end.

From Wikipedia on Dietrich:

Marie Magdalene "Marlene" Dietrich was a German-American actress and singer. Throughout her long career, which spanned from the 1910s to the 1980s, she continually reinvented herself.

It might be that Hollywood no longer likes it characters to age (obviously Weinstein, the gatekeeper, liked his women young) or is it so pervasive that our society cannot accept the wisdom that comes with age. The notion of the self consistently prevailing over or outwitting  death has disappeared in our throw away culture. 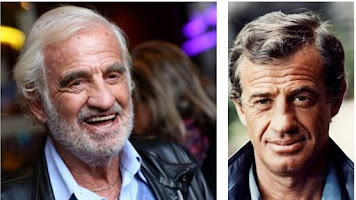 Belmondo did his own stunts barely surviving them

What to hang your hat on?  Nothingness?  This strange sort of erasure has oozed into the painting world. Three cases in point: Dana Schutz, Cecily Brown and John Currin.

When I wrote my seminal piece on “Zombie Formalism” I started the essay discussing some philosophical ideas that are current in academia that may be the underpinning of this new notion of self-erasure:

“In the first few pages of Santiago Zabala’s  “The Hermeneutic Nature of Analytic Philosophy”, there are incessant quotes and statements about how Tugendhat and other 20th c philosophers overcame the subject/object fallacy of Western metaphysics.  First Charles Taylor in a heading states: “Tugendhat is very certain of the kind of construal of self-consciousness he cannot accept. He calls it the subject-object model, and its basic error is to construe consciousness as a relation to an object.”  The author in the first paragraph goes on to quote Gadamer: ”….the subject as starting point, just as orientation to the object, is contested by making the intersubjective communication in language the new universal system of reference.” A few paragraphs later he says:”The impossibility of the mental eye means the end of any pure subjectivity, the end of Cartesian subjectivity, which implies that objects can be seen “objectively” or “scientifically”.”

This is the end of the central role played by the Socratic notion of knowing thyself. Further along in the essay I write:

“The counterattack on this sort of male gaze in 20th century philosophy is the subject of Martin Jay’s “Downcast Eyes”. To make his point about the domination of the visual in our culture, his first paragraph uses a laundry list of words etymologically based in the visual. In the first two sentences he succeeds in using: glance, demonstrate, vigilantly, keeping an eye out, illuminating insight and mirroring.”

The dethroning of the male gaze.

“And, of course, it got extended to the objectifying gaze, which was found most obviously in the male ego, responsible for all that was wrong with the world from slavery, sexism to the despoliation of the environment.”

What struck me about Dana Schutz at her Boston ICA show beyond the obvious hip ”in your face” cartoony funk of the brush stroke was the un-thought out color palette. It seemed to arise out of a beginner’s paint kit of ochres and umbers with a few primary colors thrown in as spice. There was no self-doubt or even a bow to the exploration of 20thc color's ability to move the viewer. It seemed to come right out of the tube. I pointed out in my Schutz essay how in Kirchner and Beckman, who could be considered precedents of Schutz, set off the human gaze against the acid color as in  Kirchner's case or with aggressive cubism as in Beckmann’s, that both try to dissolve it. Instead of seeing the erasure or distortion of the face as a fault or lack maybe it is just the final exit of a Shakespearean/Socratic/Christian self-consciousness. The self-consciousness that arises out of the inevitability of sin or as one sees in the American Westerns the plodding perseverance of the actor who in spite of the burden of sin tries to do good and in the end can etch something substantial into the human gaze.

But we are postmodern. We gain our identities by being part of the group/herd or experiencing no separation between the mass media and the self. Hence the cartoon faces in Schutz’s work. Currin has faces, indeed, but with his ironic gaze deconstructs the vanity of women who imagine themselves to be unique fashion plates into generic good looks. Warhol bequeaths the face to the replicability of the silk screen. But still with the recognizability of the movie star or politician of the larger culture. The persona that still might seduce us with the magic of a Dietrich or of a Garbo is in the clammy hands of Currin devoid of magic, never star quality but intentionally cloned. The snark of a scientist looking at the world through a microscope, the human entity now subject to the replication of a virus.

The best abstraction acknowledges a self that is not necessarily synonymous with the human face yet tries to achieve the steadiness of a gaze constantly undercut by the psychological and bodily drives. Gorky, Pollock, Rothko had fragile mastery of those underlying forces. Our contemporary practitioner of abstract art Cecily Brown suffers from what Baxandall perceived to be the weakness of so much late 19th c Realism. It was not grounded in the self but was merely descriptive of the current social world. The artists of the Salon painted identifiable landscapes not their perception of them. Brown thinks herself to be an abstract painter who paints abstractions in the tradition of Pollock and de Kooning but like Schutz she never thought twice about the dynamics of color and the tension of flattened space. There is no hovering of the neural matrix over the void that one finds in Pollock, the angst of Rothko knowing his colors hide the reality of one’s nothingness or Gorky’s incredible synthesis of the languages of psychology(surrealism)  and Cubism that tear at each other like angry cats. With Brown it is not zombie formalism but flaccid “Descriptive Abstraction” similar to the dead end of late Salon figuration of the 19thc. All great abstraction takes a bow to Picasso’s "Les Demoiselles d'Avignon" with its violent flattening of space and his outrageous imposition of his portrait on the women.I am reminded of  a discussion I had with Al Held of a portrait that Matisse did of his wife that he so much admired. A compression of foreground and background that releases an explosion of energy.

I once imagined a day when the earthy angst of the early work of Lester Johnson would matter more to our culture than what Blake Gopnik sees as the radicality of a Warhol. Yes! radical in that it uproots the human presence from any authentic meaning on earth. Once pulled away from the body and inserted into the matrix of mass media, it will never be radical in the true sense of the word again. It will roll on and on like tumbleweed over the modern desert. Still waiting for someone to create a radical art that is faithful to its real definition  that it  is “rooted” in the human presence. 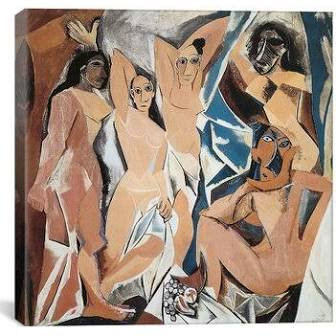 Otherwise what is there to hang your hat on.