Porfirio DiDonna: "A Painters Journey" at the Danforth Museum

I wish I could remember his name. He was a talented student at AIB. The last I heard from him he was in Brooklyn making his way as an artist. Since I never had meaningful conversations with other faculty, he became my sounding board for discussions on the contemporary scene. He was at the stage in his life, where he wasn’t worried about finding his academic niche so that art was an open book. For the faculty it was a closed book. They had solidified their styles and now wanted to solidify their academic status. Teaching was pure theatre for them, holding forth in crits and making sure discussions didn’t venture too far from the script.

I recall at one point this student and I became intrigued by the work of Jake Berthot. He showed regularly at Nielsen and had a certain presence in the art magazines. Students who moved on to graduate school often had him as a visiting artist. His work was painterly and slightly mystical in its mood. Unlike much contemporary art it had an affect that was appealing to me. It didn’t have a conceptual issue to belabor. At the time, probably the early Nineties, he was painting colorful lozenge shapes floating in a darker ground. The edges were not sharp and the centrally placed lozenges looming out of the dark ground created a sense of the painting being a search and discovery.

One Winter the student learned of a major show of  Berthot's work at Dartmouth. We decided to make the trek up there to get a good sense once and for all what he was about. I can’t remember much about our reactions to the painting in  the show except that after viewing it we went to a local tavern, the sort you find on Ivy league campuses that have a pedigree to them, downstairs and dark with lots of wood paneling, names of former students carved in the tables and a good selection of draft beer. It was warm and cozy, a respite from the cold winter air. Enjoying a good draft beer, I found myself humming spontaneously: “Chestnuts roasting on an open fire”. Was it the mood of the Tavern? Or was this the sum total of the mood of Berthot's paintings? Did they radiate an atmosphere that didn’t go much beyond a popular ballad?

Low-grade spirituality. Reminded me of what I wrote about another Nielsen artist, a protégé of John Walker, who now shows at Alpha. Her expressionist paintings of beaches at slack tide conveyed  the low-tide languor we experience when we visit beaches off season. If Berthot makes me hum “The Christmas Song” then her work got me humming  “Ebb Tide”. I called her Johnny Walker Lite.

Last night I went to a member’s opening at the Danforth Museum of another Nielsen artist,  Porfirio DiDonna, which purports to revive interest in an artist, whom they presume should have more recogniton than he is currently accorded.  He died in his mid- forties in 1986. Before his death he was able to develop a distinct style that also embodies the sort of yearning that I observed in Berthot’s work. According to the literature accompanying the show, he was a devout Catholic on a path to inner spiritual truth. His early work is put together out of minute dots that follow grids and are reminiscent of Agnes Martin. Each mark could be seen as the gesture of a believer denoting each Hail Mary with a flick of the rosary beads. There is a sense of marking time. The body of work that is ostensibly the most Catholic is put together with patterns and bands of warm colors that resemble at times chalices, or at other times elaborate priestly garb.  The marks that add up to these images/symbols remain independent as gestures of color on their own. Often they are S shapes, where the S gives a kind of thrust or purpose to the lines, a dance or flickering of the candle flame if you will. It is as though he deconstructed the images of the church in the way Hartley deconstructed the images from the life of his German soldier lover to create a pattern of love and relationship. In fact, from a grammatical point of view, DiDonna’s work seems deeply informed by Hartley. It is more gestural and the parts have an inner thrust to them that is reminiscent of deKooning or Pollock but in the end, if Agnes Martin

informs his early work, Hartley is all over the last work.

It is unfortunate that we will never know where DiDonna would have gone with his quest to know something beyond his physical self. Unfortunate, as well, in that the  gestalt of his last works seems earnest, yet, a lot like Berthot’s, rests on the level of inchoate emotions. There is too much feeling and not enough knowing. Or maybe ”not knowing”. I think that if there is a God his transcendence is so far beyond our physical reality or any cognitive act that we can perform, that if we were to get close to it, it would char our souls to a crisp. Spiritual guides often warn adepts of pursuing a search for God, as it is fraught with danger and numerous cul de sacs.http://hyperallergic.com/97175/beer-with-a-painter-jake-berthot/

This show captures a creative climax, where everything holds together.There is the  spiritual glow conveyed by the  colors and his  gestures do take Hartley to a different linguistic space. But as a friend and artist said after reading Baker’s exegesis on DiDonna and recalling his work:

“About the shape of knowing:  I never understand why mysticism always takes the shape of monotonous centrality, soft edges, elegant curves, glowing light and color etc. etc. I like to think I'm reaching toward a kind of mysticism but through urgency, agitation, and explosiveness with an underlay of stillness.  It’s more how I sense the universe to be.”

Solid work, thoughtfully wrought, full of sincerity but I think in the end it leaves this viewer unconvinced of its greatness.  Maybe this was the first basic level to be uncovered in his spiritual journey.Greatness lay ahead of him, possibly.

Review of a recent show of his work at Elizabeth Harris.

A reprise from Charles Giuliano's Beer and Burger series of discussions with Boston Artists.In our case it was over beer and pizza at Santarpio's in Eastie

An interview from 8 years ago. 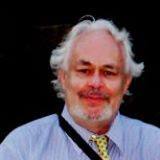 Posted by Martin Mugar at 5:35 PM No comments:

Berkshire Fine Arts just published a review by its publisher,Charles Giuliano, of Chawky Frenn's "100 Boston Artists" that came out this past Summer

You can buy the book on Amazon 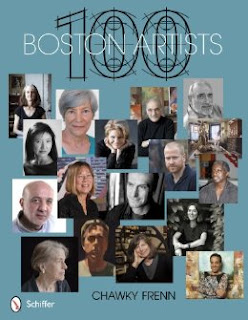 Posted by Martin Mugar at 5:33 PM No comments:

I have been searching for a topic and the WSJ provided it:Martin Mugar as part of the scenery

BOSTON — Recreational saltwater boating contributed $3.5 billion to the Northeast's economy last year and supported the equivalent of 27,000 jobs, according to a new study on the reach of a historical but underanalyzed industry.
The findings highlight the economic power of the 374,000 recreational boaters along the region's coast as local ocean development appears poised to accelerate. Aquaculture pens, wind farms and offshore utility lines are examples of the existing or proposed ocean uses, and boaters want a voice about such projects in waters they share.
Since the survey ties significant jobs and economic growth to boating, that can expand the industry's influence, said Grant Westerson, head of the Connecticut Marine Trades Association in Essex, Conn.
"If we can show that boating returns to the state a lot more money than it had anticipated, then they'll listen to us a little more," he said.
Local harbors are filled with vessels from sloops to cigarette boats, and boats have been critical to the Northeast's commerce and leisure since they carried the first settlers to shore. Despite the historical foothold, there's little data about recreational saltwater boaters, such as the routes they take to get where they're going and how much they spend when they get there.
That data gap became a potential liability as various interests sought a voice in implementing President Barack Obama's national ocean policy, which aims to create a balanced approach to ocean use.
About 12,000 randomly selected boaters participated in the survey, conducted between May and October 2012 by the nonprofit ocean research group SeaPlan, the Northeast Regional Ocean Council, state coastal planners, private industry and the First Coast Guard District.
The survey estimated local boaters made 907,000 marine recreational boating trips in 2012, contributing $3.5 billion total to the economies of the coastal Northeast states surveyed, from Maine to New York. That's roughly equal to the domestic seafood industry's economic impact in 2012 dollars in those six states, according to federal statistics from 2009, adjusted for inflation.
Boaters spent an average of about $1,150 on boating trips last year (including about $200 at restaurants) and more than $7,000 just visiting, docking and maintaining their vessel.
The study indicates boating supported 27,000 jobs across several sectors, with leisure and hospitality (7,700) and trade, transportation and utilities (6,700) the top two.
Andy Lipsky, SeaPlan's director of policy, noted the study may significantly understate boating's impact since it leaves out boat sales and boats registered in inland counties.
"It's not perfect," he said of the study. "But it's a good start."
The survey required boaters to record their travels on an online map. The map showed boating activity at 4,600 spots, along with the routes people took to get there. That means developers planning an offshore project along the coast, for instance, can see if the area is heavily traveled by boaters now and avoid potential conflicts, Lipsky said.
"(The survey) helps boaters see themselves and use that information to advocate for their interests, but it also provides important data information for other ocean users, so they can make better decisions," he said.
Fishing — mainly for striped bass — was the dominant activity for boaters in every state except Maine, where wildlife viewing and relaxing was more popular.
The study's demographic data showed more than 90 percent of boaters are male and average 59.4 years old. Nearly 57 percent of boaters make more than $100,000 annually. About 22 percent make $75,000 or less.
The survey indicates most boaters were generally confident they can co-exist with various ocean uses. For instance, 58 percent thought it was "somewhat to very likely" that they could still enjoy boating near offshore wind turbines, which are hundreds of feet tall.
Artist Martin Mugar, 64, of Durham, N.H., who took the survey, began boating at summer camp as a kid and now owns a 25-foot sailboat.
He said boating has a unique culture that participants enjoy but is also part of the region's draw. When tourists headed to the Isle of Shoals pass by, "I'm part of the scenery," he said with a chuckle.
The survey shows boating's broader benefits, Mugar said, and it can only help boaters to be "perceived as being assets, and not just people out there having a good time — which we are."
—Copyright 2013 Associated Press

Posted by Martin Mugar at 5:54 PM No comments: