The breaking away of Heidegger from his mentor Husserl's thinking is often discussed in histories of Heidegger's thought as a momentous event not just for Heidegger's evolution as a thinker but for European philosophy . What was he breaking away from and why was often unclear to me? I understood the role of Dasein in "Being and Time", that notion of lived space among others that is a priori to consciousness. I had already suspected that Husserl's eidetic reduction was an important idea shaping cognitive science. Eidetic reduction is a sort of universal construct  whereby outside reality is reduced to pure consciousness irrespective of time and space. It is a concept based on a transcendental notion of consciousness in the tradition of the Cartesian cogito ergo sum. Go for a hearing test and you will experience I believe this reduction in its essence. Pure tones are submitted to you in an isolation booth.Your inability to detect any of them in a full range of possible tones will indicate the health of your hearing.

Recently I read  "A Parting of the Ways" by Michael Friedman, that focuses on the famous Davos debate between Heidegger and Cassirer in 1929 and its relationship to the subsequent split in philosophy between logical positivism and existentialism. One paragraph brought into focus the abyss between Heidegger and Husserl, and clarified for me once and for all the difference between these two thinkers and in particular its possible relation of these ideas to the painting of Rothko and Hofmann. 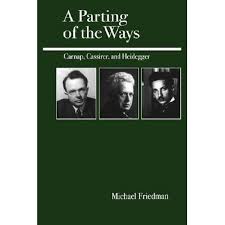 Here is an extract from that paragraph: "Similarly, we can grasp the general natures of intuitively presented colors or tones and thereby establish  a priori "eidetic sciences" of the structures of "color space" or "tone space". And by the same method in phenomenology, we can grasp the general nature of intuitively presented psychological phenomena and thereby establish the a priori "eidetic science" of "pure consciousness....In this way, moreover, we can establish  a special and unique a priori science(which, in particular, is non-mathematical)- a science that can serve as the foundation for all other a priori sciences..."

When I read "color space" both Hofmann and Rothko's work came to mind: the reduction of color to pure hues and its subsequent extraction of those colors from the lived space of the human life. I had dealt with this distinction in the blog:"The Humpty Dumpty effect" where the breakdown of the lived world into cognitive parts could not be put back together again. The work of these two artists have the  foundational structure of science. But Heidegger asks: what about the historical nature of mankind, both its finitude and its insertion in an historical epoch that limits or expands its sense of self. In other words: its temporality. What is brought into question by temporality is the the purity of human consciousness. Is our humanity only understood by a hearing test? Of course our lived reality is enhanced if we can invent instruments based on our scientific knowledge of hearing. But what happens when all notions of being human are taking place in a laboratory? If we consider first our bodily existence and its insertion in what Heidegger calls the "always already" of the world around us, we can see it precedes consciousness. We are thrown into reality in a time and place that is beyond our control. Heidegger's is a darker picture and more tragic picture of human existence than that of Husserl.

If Husserl gets Hofmann and Rothko in the world of art, who does Heidegger get? Without a doubt it is Giacometti. His figures stride blindly with an existential force that is bigger than their consciousness. They are shaped by the space around them and his drawings sculpt out a shared space of the seer and the seen. Permeating all his work is an overall anxiety that recalls Heidegger saturated Sartre's famous saying that "Hell is the other".

The third character that makes up the trio discussed in depth in Friedman's book is Rudolf Carnap. Although he was not a presenter at Davos he interacted with the participants and went on to an illustrious academic career as a "logical positivist" and a member of the Vienna Circle. He had some sympathy for the thinking of Heidegger in contrast to Cassirer only in so far as it was anti-idealistic. Except for Cassirer there was a drive among this trio to extract philosophy from its ground in a higher truth. But that sympathy ended there. Carnap had no tolerance for Heidegger's proclamation that "Nothing nothings". For him it was illogical and unprovable.

The politics of Germany brought Cassirer and Carnap to the United States and left the right wing Heidegger alone in Europe as its most famous philosopher.  The artists and architects of the Bauhaus such as Gropius and Albers came as well.  Friedman states that the underlying theme of this group and of Carnap as well was anti-individualistic and socialist. They found work readily in American Universities with Cassirer and Albers going to Yale and Carnap and Gropius teaching at Harvard. Carnap was a fan of the Bauhaus ideas of an architecture that no longer built monuments to the Aristocracy and the Bourgeoisie  but buildings that  managed mass society. Form as social function in architecture was their mantra.


This notion of the importance of thinking as grounded in the group not the individual seems to me to favor a kind of abstraction that achieves its realization only as an integration of the part into the whole. This combined with the locus of the human consciousness in the cognitive v.s. being in the world handed the human individual meaning over to its integration into social function

Artists that fit the thinking of Carnap would of course be his fellow emigrant from Germany Bauhaus educated Albers and the Austrian sculptor with whom I studied, Erwin Hauer.


Of course the 80's and 90's would bring to prominence the ideas of the post modernists such as Derrida, Foucault and de Man, all of whom were influenced by Heidegger's notions of deconstruction.Many of them found positions in American Universities the most famous being de Man at Yale. But that is another story for another blog post.