My great uncle was an anomaly on the Armenian side of the family, that came to this country at the beginning of the 20thc. The family was working class not by choice but by necessity, but Marvin was an artist and his sense of necessity was to follow the demands of his love of art. While still a young man in Boston, he befriended John Singer Sargent, who was working on the Boston Public Library Murals and received periodic instruction from him. He contintued his studies in Paris at the Academie Julian and came back to Boston, where he became a very successful portrait painter. Among his commissions were Admirals and Massachusett's Governors. Arshile Gorky, at that point known as Manouk Adoian, studied under Marvin at the New School for Art and Design on Boylston St, where he taught after coming back from France. He described Gorky as showman of sorts, who dazzled the female students with his ability to make perfect circles freehand. After Gorky moved to New York,  Marvin attended the opening of Gorky's first show in the city. According to Marvin, Gorky ignored him at the opening. My uncle felt that this response was due to some embarrassment by Gorky about his new work, which was no longer tonal but clearly influenced by the avant-garde. I learned from the film "Without Gorky" that Gorky did not want anyone to know he was Armenian and in fact his wife only learned of his heritage from the local grocer in Sherman CT. Even then when confronted with the truth he denied it. I suspect the presence of Marvin at his opening irked Gorky. Marvin, who knew he was Armenian, would have blown his cover as the son of Maxim Gorky. Hence the snub. I have subsequently studied the chronology of Gorky's life  on the Gorky Foundation website and noticed that Gorky borrowed Marvin's credentials as a grad of the Academie Julian and student of John Paul Laurent for his resume, when he was  a teacher at the Grand Central School of Art in New York.

Recently in Paris I was wandering  with my wife Alix on the West Bank, when we found ourselves by chance on the Rue du Dragon. Alix said that the school she attended, Ecole Met de Penninghen before going to the Sorbonne to study art education, was on that street. We decided to revisit her old haunts. When we walked into the courtyard I saw inscribed on the wall above the entrance:Academy Julian.There was a little confusion, as I tried to figure out what the connection was between the two schools, since Alix had never mentioned that the school she attended, which was rather new at the time, had been previously the Academy Julian. The school was out of session, but, by chance, we encountered a man who happened to be the director. He was interested in chatting with us in particular Alix, since she was able to recall some her fellow students, one of whom was now a teacher at the school. He explained the connection between the Academy and the current school, the details of which I don't recall. I told him about my ancestor who had gone there. The assistant director was writing a book on the history of the Academy.The director asked us to talk with him about Marvin. At this point the reader might have noticed that Marvin's last name is the same as the academy. Marvin's Armenian last name was Chooljian, just enough of a phonetic resemblance to swap one for the other.


The assistant director went through a data bank on his computer and found Marvin's name. He asked me to send him some information on him to include in the book.This is what I sent him:The list of some faculty at the Exeter School of Art in Boston from the 1930's. 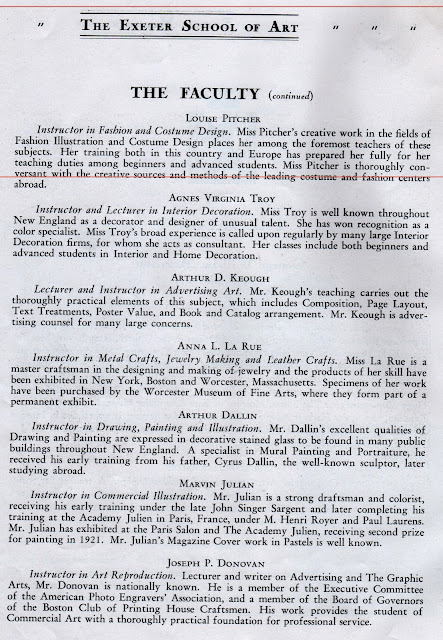