Paul Pollaro, a student at UNH, when I taught there in 1980, asked me to write something about his work for a show we had hoped a local gallery would give us.We never heard back from them and in the meantime he landed a show at HP Garcia in New York.Scorned by a backwater gallery(both literally and figuratively) in Kittery, ME, but now showing in the Big Apple,I thought I would publish the words just the same. 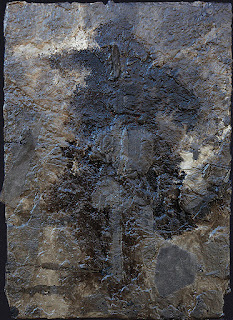 When I was an undergraduate art student at Yale I would observe the work of the graduate students during the critiques. There was one grad student whose name I can’t remember and work I always admired. He looked like James Dean, and had his kind of moodiness as well.  He was married and had a child, which set him apart from the other grad students, who were already building their careers on the backs of the well-connected faculty.  He painted scenes of cars parked under street lights at  dusk with a few people lingering around the cars. They were big paintings and picked up on the photorealism of the time without the cooling affect of the photograph. They were full of sentiment, the kind of emotions that overwhelmed me as an adolescent. Seasonal moods that provided the titles for so many songs: e.g. ”August Moon”, “Ebb Tide” or “Autumn Leaves”.  All the tunes expanded the moment and let the self leak into the environment.  Both self and environment are captured in the moment, a kind of synchronic meshing with the wheels of time.  This momentary expansion of the self implied a sort of vulnerability and  permeability, where the self is cracked out of its solipsistic shell.

It was not this now nameless artist’s vision that would define the next thirty-five years of  art world production. Most of grad students I observed were under the thrall of the minimalist dicta. As a grad student at the same school a few years later I would be subjected to the same, which amounted to a sort of exorcism of the individual personality.  I was now in the Church of Modernism and the inquisitorial priests wished to cure me of any romantic tendencies.  And in the art world after “minimal self” there came “no self”, which can be learned like any trade.

The cynicism of 20th c art has worked its way down to the masses so that every wannabe musician and artist knows the cynical logic of the modern aesthetic. Keat’s romantic “Ode to Autumn”, the consummate blending of self and environment finally had run its course culturally in the the pop tunes of the 40's and 50’s. The wheels keep turning and we don’t know sometimes where we are in the gyres. Most often we are crushed or rendered irrelevant by them.

In my conversations with Paul Pollaro, it is the emotional side of his work that he’d rather talk about. From studying his work I can pick out his indebtedness to Modernism’s love of technicity and labor. He knows how to push and pull the figure-ground like Matisse, and his figures float in a field worthy of Cy Twombly.  His gestural mark-making  and love of material  can only be made by someone who studied the breakthroughs of de Kooning and Pollack.  These are paintings that are worked on, not hiding the labor, with a sense of being forged in heat, sweat and soot.  But he could care less about that. He knows that technique is not an end itself; it has to be put to work, i.e. used.  It has to take you somewhere. Somewhere beyond the physicality of the paint.  As the Buddhists like to say it is not the finger pointing at the moon but the moon that we should be looking at.

Pollaro is looking to break the solipsistic shell, a visionary looking for signs of life out there beyond his own. The work doesn’t say exactly where they are.  Is it in the earth that he is digging for artifacts of a civilization without rhyme or reason?  Or does it go beyond just knowing and become the vision of a mystic in the darkest night, where visions barely illuminated flit fitfully in obscurity?
Posted by Martin Mugar at 11:21 AM