Starting with Anthony Powell and ending with De Kooning via Hegel 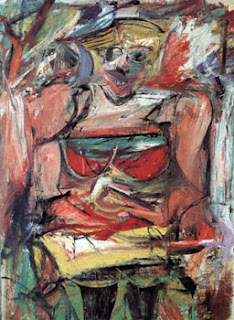 Several weeks ago I was invited to lunch by a good friend,Addison Parks, who asked several mutual acquaintances to join us. I recalled that one of the guests in his role
of gallery director had shown the work of a friend of mine, Don Shambroom,whom
I had met at college almost forty years ago. I told the gallery director,John Wronoski,
that this friend had appeared and disappeared in my life and had
recently reappeared after an absence of ten years by being highlighted
as someone I might want to link up with on LinkedIn. The gallery director,
who is also an antique book dealer, said that my description of this
relationship reminded him of the Anthony Powell twelve volume book
”A Dance to the Music of Time”, that follows the lives of a group of Oxford
graduates over a lifetime as their movements conjoin or pull apart.

Recently I decided to make the leap from virtual reality to
the real world and actually get together to chat with this artist friend.
We arranged a visit at his home in Massachusetts.
One thing we learned in our five hour talk is that there
were other people, whom we both knew, who were participating in
this dance, some, in particular, art professors from College whom we
both knew and others whom we had become friends with separately. The first
of these latter connections was our visits with Norman Rockwell in the
Sixties as aspiring young teenage artists. We both got the same
advice from him to go to art school and not college, which
we both ignored.Our conversation touched briefly on my blog and in particular the piece on
the “Humpty Dumpty Effect”. My description of this process had a strongly
entropic bias to it. As Yeats said in "The Second Coming: ” Things fall apart
the center cannot hold”. De Kooning’s name came up as someone who took
things apart and then tried to put them back together again. Cubism allowed him
to tear  apart but the holism of the human body and the force of his gesture
allowed him to tie everything back together in a way that the human body had
never before been subjected to: centripetal and centrifugal
at each others throats. Last night I came across a book on Heidegger’s late
writings entitled “Four Seminars” that are transcripts and analyses of
gatherings of Heidegger and his students in the South of France to discuss
in particular some portentous Hegelian sentences. All of this is off the cuff.
His references range from Wittgenstein to Marx to Norbert Weiner. A quote
from Hegel becomes the source material for a long discussion, which I think is
relevant to what has been said above in regards to de Kooning.The original
statement by Hegel goes as follows:” A mended sock is better than a torn one”.
Heidegger transforms it into his preferred form:” A torn sock is better than
a mended one.” His discussion revolves around unity. When the sock is whole
and being worn we are not aware of its unity. When it is torn we become aware
or self-conscious of what holds it together in its being as sock. Therefore the split
points to a preceding wholeness. To mend it brings it whole again but with a
self-awareness of an underlying unity. Is this not what de Kooning does: he
takes the world apart and then tries to mend it. Hegel says that the scission
points to a need for philosophy. I think that this bringing
back together is explosive in two ways: #1 the effort to tie things back, the
mending. #2 The force that resists this mending and wants to dissolve again.
His work participates in a dialectic as it moves back and forth between
the whole and its parts and back again to a new whole.