In the first few pages of Santiago Zabala’s  “The Hermeneutic Nature of Analytic Philosophy”, there are incessant quotes and statements about how Tugendhat and other 20th c philosophers overcame the subject/object fallacy of Western metaphysics.  First Charles Taylor in a heading states: “Tugendhat is very certain of the kind of construal of self-consciousness he cannot accept. He calls it the subject-object model, and its basic error is to construe consciousness as a relation to an object.”  The author in the first paragraph goes on to quote Gadamer: ”….the subject as starting point, just as orientation to the object, is contested by making the intersubjective communication in language the new universal system of reference.” A few paragraphs later he says: ”The impossibility of the mental eye means the end of any pure subjectivity, the end of Cartesian subjectivity, which implies that objects can be seen “objectively” or “scientifically”.”

It is interesting to unpack this in relation to the transition to abstraction at the beginning  of the last century, and in particular a rather recent recycle of minimalism that is cropping up in New York galleries and has received an imprimatur by the Whitney with a mid-career show of Wade Guyton, one of its practitioners. It provides an insight into the endless politics of suspicion that permeate so much of Western Culture over the last century and in particular painting. The ambition for the thinkers quoted above is to liberate our consciousness from a subjectively based consciousness that for various reasons is beholden to visuality. The first manifestation of this subjectivity or the “mental eye” was first seen in the realism that commenced in the Renaissance with the use of perspective and then in the Baroque with chiaroscuro. It reigned confidently over painting until the end of the 19th century. This mental eye was built out of clear notion of a strong subject, that shaped via a scientific understanding of perceptual processes, the world that surrounded the artist. The imposition of the gaze of the individual on what surrounded him seemed to parallel the thymotic excesses of Western Civilization as it objectified via science and capitalism the whole world. The image of the conquistador Aguirre in Herzog’s classic film “Aguirre, the Anger of God” descending the Amazon and conquering solely with his imperious gaze all that he surveyed is probably the most emblematic image for me of this attitude. A rather powerful bit of information to support this notion of Western consciousness is that the perspectival system of the Versailles gardens radiated from the bed of Louis the XIV.  Sartre has a lot to say about the withering gaze of his grandfather, who was an old world authoritarian type. The counterattack on this sort of male gaze in 20th century philosophy is the subject of Martin Jay’s “Downcast Eyes”. To make his point about the domination of the visual in our culture, his first paragraph uses a laundry list of words etymologically based in the visual. In the first two sentences he succeeds in using: glance, demonstrate, vigilantly, keeping an eye out, illuminating insight and mirroring.

Zabala goes on to say: “If the old philosophy only referred to what could be seen clearly, the new philosophy refers only to what can be clearly communicated.” Rorty and others call this transformation: the “Linguistic Turn”.  Science required that objects be placed under the scrutiny of the researcher and submit to the scientific method.  A strange amalgam of suspicion and arrogance worked together in a mighty cabal to turn the world inside out. A naive acceptance of the world as it is presented on a day-to-day basis was replaced by a vision that the world must be founded on a more solid basis through the power of logos. The world became transformed into a series of topics: geology, anthropology, sociology, psychology, grammatology etc.

The first crack in that stranglehold on the real appeared in the phenomenological studies of Husserl and Heidegger. Heidegger has a phrase that always carried a lot of significance for me: “always already”. If we act on the world in a certain way, we are always already in it as a participant with other people using a language that we did not create. The pure cogito was immediately problematized. Our relation to things is not one of subject to object, but a more shared engaged reality of being in the world. His word for that reality was “Dasein”, which roughly translates as “being there.”

This became the start of a hundred years of philosophers trying to decenter the scientific gaze by deconstructing the language of metaphysics, with each new generation of philosophers accusing the previous one of still being subject to it. Wittgenstein added to this deconstruction by moving our focus away from the metaphysical to an analysis of how we use language in the real world. During the most recent era of French Deconstruction one adjective that you didn’t want attached to your ideas was “logo-centric”. Initially, the problem was that behind the strong ego was the belief in God as the origin of everything in a well-ordered universe, which still supported Descartes rationality. After that everything logical was perceived to be just a trace of that divine belief system, which had to be expunged from wherever in our language it was still hiding. And of course it got extended to the objectifying gaze, which was found most obviously in the male ego, responsible for all that was wrong with the world from slavery, sexism to the despoliation of the environment.

I got off on this tangent after reading John Yau write in“HyperAllergic” about what he called the latest “look” in Abstraction. The work of its practitioners, Morris, Guyton and Kassay looks very much like the Abstraction of Stella, Reinhardt and Kelly, which is decidedly logo-centric. Greenbergian ideas about reducing forms to basic elements and constructing abstract realities went hand and hand with the positivists who believed in the superiority of mathematical language over the language of poets and mystics. “What you see is what you get” Stella is purported to have said. The early spirituality of Rothko and Mondrian is gone. These artists are laconic macho painters. They give you the least amount of what might be construed to be a painting and then pull up the ladder behind them. I suspect that this paring down of painting to simple terms embodies in some manner the analytic analysis of language, which reduces language to its grammatical elements and then submits it to validity tests. They want to see how painting functions as shapes on a wall. Or as they loved to say in grad school: does it work.

Already Yau, who is not a fan of these artists, does accept the premise that we should not go back to the days of the gigantomachia of Gorky and de Kooning. And there may be some truth that this generation of artists is too imbued with the culture of deconstruction to attempt to overcome Kelley, Stella and Reinhardt or in the case of Kassay, Ryman, at least on their own terms. Something else is going on here: There seems to be a need to push painting toward something totally inert, that could be simply part of a common language, no longer power-laden as the last word of something irreducible, which was the goal of Kelly, Reinhardt and the early Stella. The work of these artists becomes as common as money, just a token of exchange, like baseball cards. By shifting the terms of painting away from any lingering notion of being an object and pushing it into the realm of language and in the case of Guyton producing the painting mechanically with an inkjet printer, sets the painting free from its roots in science and objectification.

If the influence of Tugendhat and analytic philosophy is as pervasive as I think it is, the primacy of language theory would give permission to this generation to take painting further down the road to just words and sentences. Rorty who had his role in this winding down of the metaphysical, critiques Heidegger because “he treats language as a brooding presence rather than as a string of marks and noise emitted by organisms and used by them to coordinate their behavior.”

Heidegger placed importance on the ignored copula “is” that we use without acknowledging its role in grounding our day-to-day use of language in something more numinous. It backgrounds it and in poetry approaches the foreground. In the case of our contemporary practitioners of abstraction it has been excised.

These works of art look like paintings, act like painting but on closer inspection are as bloodless and lifeless as zombies. That the New York culture allows this kind of painting to rise to the top is no surprise: the New York financial world is known for creating zombie loans and the NY Fed has succeeded in creating a zombie economy. 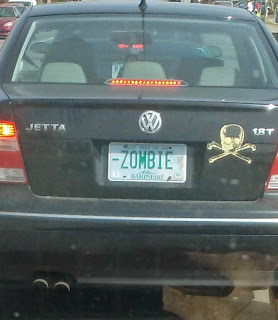 Simone Weil said that culture moves in grand arcs either ascending  or descending. Assuming the movement is down, could it be we have reached the bottom?

References to this article on line and in hard copy:

Raphael Rubinstein references my role in coining the notion of Zombie Formalism in paragraph 19 in this article in "Art in America", another reference to the sequence of events here: About:Content, Another reference:capscripts, and  at Paint This Desert and most recently on Hyperallergic

Link to by my book on Amazon

Notice the correlation of Zombie art to Zombie Economy

nice interview on my ideas on ZF by Miles Hall