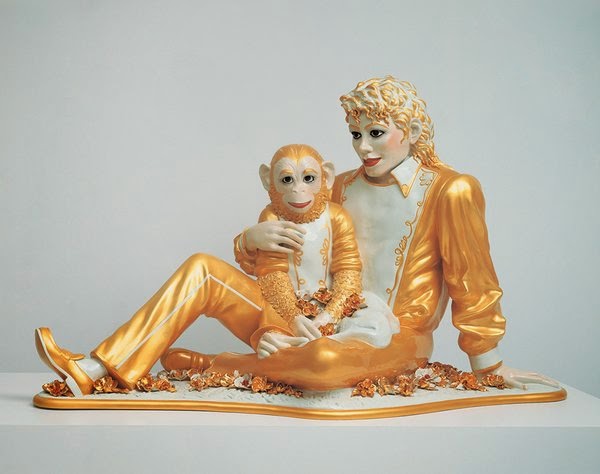 Jed Perl continues his quixotic tilting at wind mills in his latest review of the Koons phenomenon.That something must be said to deflate this conflation of art and global finance goes without saying.There is a slightly queasy sensation when we behold  the commercial event surrounding the work but also the work itself, an emotion that the early critics felt spoke to Koons being an artist that they had yet to come to terms with.The notion of the avant-garde that keeps pulling the rug out from under the complacent Bourgeoisie is the paradigm they use to justify his historical significance.Weren't the French academicians appalled by Cezanne and Van Gogh; the New York press by the Armory show?

Anxious to be on the right side of history the apologists go to no end to convince us that Koons is the latest turn in the on-going dialectic toward perfect self-consciousness, bringing us closer to our inner essence, which they stupidly imagine to be a love of kitsch. If you look at the work dialectically it does not in any way serve as a heightening of self-consciousness that counters any synthesis as did the work of Cezanne, for example, but rather represents a collapse of any tension between the individual and society. In my review of a show at the MFA in Boston, that placed the work of the Impressionists side by side with the work of the Academy, I demonstrated that  artists like Monet were more in touch with the scientific tradition of optics that had informed the work of someone like Chardin, than the academicians who painted in a fatigued version of chiaroscuro and were unable to take the next step toward color perception in painting. If you assume that the essence of the Impressionists and for that matter Matisse was to paint crudely and assume that any time you witness that crudeness in art it is a sure sign that the artist is the next Matisse, you are putting the cart before the horse and in fact create a perverse paradigm that only bad taste can assure that an artist's work is of enduring value. Monet was studying color theory, bringing painting back to the perceptual roots of the Renaissance and the Baroque and Van Gogh was searching in the tradition of the Christian saints for a way to overcome not just the spiritual smugness of his time but to make his life more meaningful. They were both reactionaries,i.e. backward looking, in their attempts to move painting forward. They were more self-conscious than their contemporaries and more aware of the the traditions that shaped European painting.

Look at Cabanel and Bouguereau if you want to see  precedents of Koons. They too leave you with a queasy feeling in your stomach. Unctuous, syrupy, cloying. In some sort of intellectual legerdemain, the contemporary critics imagine Koons to be cutting edge but as Perl says there is no way he can be put in the same category as the ascetic Duchamp, whose leap out of the visual still remains hard to process today. He is rather the protege of Warhol who saw the individual as merged into the commercial.That abandonment of the self into the commercial is the goal of all the rich businesspeople who buy Koons' work. They make their billions by seeing the masses as Play-Doh, just material to exploit. If we are as emotionally devoid of seriousness as Koons proclaims, we are ripe to enter a strange sort of paradise of the end times where we surround ourselves with kitschy possessions and kitschy emotions and dissolve our lives into some sort of colorful puddle. Are we at the end of history where Hegel's Absolute is the media and the tension between the heft of the individual and the media is erased.

.Just as the academicians were a symptom of the decadent Bourgeoisie of the 19thc, whose pseudo- classical vision of mankind had no relation to the facticity of the lives of real people so Koons is the wet dream of the class of global kleptocrats who envision the masses  acquiescing absolutely to their drive to sell us more and more things. I agree with Perl that something is rotten in the state of Denmark and quote Shakespeare's  quintessential paragon of self-consciousness:Hamlet:

"Oh God I could be bounded by a nutshell and count myself a king of infinite space-were it not that I  have bad dreams."