Reality and Desire, Armenians as outsiders and Phillip Morris

Is it just laziness or is it just more honest to find the world lacking than to imagine it fulfilling ones dreams. I follow on Twitter quotes from “Moby Dick” that seem to reinforce the sense of the disconnect between dream and reality, the ephemerality of things coming and going, appearing/disappearing. A sailor on a calm day stationed on the mizzenmast loses balance and falls into the sea never to be seen again. Or the crew of the Pequod losing all sense of self-determination at the hands of Ahab: helping to fulfill Ahab’s dreams, whose own utmost dream that they are embroiled in, is nonetheless left unfulfilled.

The strange interface between desire and reality is worth meditating on. For the nexus to work it seems that one has to dumb down both reality and desire. The reality of Facebook and Twitter probably encapsulate a space where one can imagine a “like” to one’s opinion to be self-reaffirming.

I wonder as I read about the current political currency of Right and Left and having to adjust my opinions based on the latest revelation of who did what to whom or in the case of one candidate just forgot to do period, I don’t know what is fact or fiction, everything seems to be mediated. Are the Russians manipulating the news or is it Soros or the Koch brothers. Can I base my self-worth on having opinions about something that may or may not be real? But it is the tissue that ties me to the world. Do I exist without out it? According to the political theorist Carl Schmitt an intellectual admired by the Right and Left we are pure political animals hungering not so much to be for something as in need of an enemy.

But there are some things that transcend this mediated reality. Before reality’s waxing and waning, its sudden contretemps and pirouettes, comes the personality of the observer and that personality has a history in its ancestry. The mediation of reality comes from a historical predilection to engage or not in the public realm. To know what I can control and what is beyond my control. I am still startled to this day by a comment made in conversation by an Armenian after the funeral of his brother in law, my good friend William A. Henry 111, a journalist and author who died in his early forties. As Armenians, he stated, we will always be outsiders. The principal of a large public school in Rhode Island, he was as far as I could tell successful in his occupation.  The details of what prompted the conversation escape me as the conversation took place more than 20 years ago. I recall relating it to my cousin who, like myself, is half Armenian. She is involved in and founded several charities one directed toward Armenia, another purely directed toward the US, which brings her in contact with the Country Western musicians who perform at her fundraisers. No one would appear more integrated into American culture than her. Yet she was in total agreement and seemed interested in pursuing the topic later but probably as many years have gone by since that conversation as have transpired since I spoke with the Armenian school principal and we have not picked up where we left off. But that notion of estrangement resonated within me and was a sort of confirmation of that estrangement from the dominant culture that was continually reinforced by anecdotes from family history: a sense, in short of an outsider looking in at something at core alien to itself.  Oddly the most poignant one comes from my mother’s side of the family. They were Germans living in the woods of NH and from stories my mother told harshly discriminated against by the Yankee natives. It was assumed that as immigrants they had no right to vote although they were in fact American citizens forcing my grandmother at one point to go to the state capitol to get proof of their citizenship. My father related numerous stories where he observed a sharp line between his cultural upbringing and that of the Yankee aristocracy that lived on the other end of Huron Ave in Cambridge.He enjoyed reminding me that even if they had more money than he did they did not know how to eat properly.

In the recent film “Spotlight” portraying the expose by the “Boston Globe” of the sexual predation by priests of the Catholic church on adolescents, the lawyer an Armenian, pursuing the diocese on behalf of the victims could have followed a path that let the Church deal on its own with its problems internally. As an outsider and from a people who were persecuted by a hegemonic regime, he identified with the victims of this horrific injustice. He felt compelled to bring the perpetrators out from under the shelter of the church into the harsh light of the criminal justice system. Was it a memory of how Armenians were treated by the Turks in the Ottoman Empire that haunted him? Being a stranger in one's own land was brilliantly portrayed in Elia Kazan’s “America America”. Kazan conveys vividly how nothing could be done to right the injustices imposed by the Ottoman Turks on the Armenians and Greeks, so absolute was the control they had on their ethnic minorities, short of outright revolution. When the main character, an Anatolian Greek, inadvertently gets involved in a conflict with the Turkish authorities on the side of a revolutionary Armenian group, his father has to solicit the help of his contacts in the government to get his son freed from prison. It is a kind of slavishness, which was the only way to survive in an oppressive society. This acquiescence was not the route pursued by the Armenian lawyer. As my Armenian grandmother said to the foreign-born husband of a woman she had taken into her apartment to protect her from his abuse:” This is America. Women are free!” The Catholic Church despite many of its still liberating credos and tenets remained Medieval as an institution in its top down control over its followers. It had been a touchstone for Catholic immigrants themselves persecuted by the Protestant majority in America but as it gained acceptance and power within the society as a whole it succumbed to the exploitation of those it was supposed to serve.
I remember being startled in a conversation with a Navajo at a craft store in Arizona that indicated he felt that we were not standing on the same cultural platform.  The interlocutor showed his disdain for me not in words but by ending our conversation, which seemed to be going quite smoothly, rather abruptly. In so doing, he seemed to say or so it seemed, that although we were both American citizens there was a difference in our American experience. I am sure it was nothing in particular that I said but a feeling that he was sharing too much with me as an outsider about his life. Would it be any different if I were chatting with a Turk about both coming from Anatolia until we realized that the experience of my ancestors at the hands of his ancestors was nothing he wanted to acknowledge. And most likely he would have been indoctrinated to see me as an age-old archenemy.

I had a friend of pure WASP ancestry, descended from a world of country clubs, tennis whites and a notion of where to live and how to properly behave in society (a domain where I was always falling short to his chagrin). Whenever the stock market would collapse, he would admonish me to invest in Phillip Morris. He confessed that this was the stock of preference of the aristocracy. If you look at this chart you will see it has almost doubled since 2014 and even now offers a dividend yield close to 4%. In this yield starved economy where the pensioner, who put his money in treasuries is getting close to zero percent this is extraordinary. Why bother with hot tech stocks when you can invest in the exploration of new markets for nicotine in the Third World. Of course I never took his advice because it was hard for me to understand that some things are absolutely true and incontrovertible. For me reality is only in the end doom and gloom and genocide. But if there are enough people with money out there to say something is safe it is naïve to think otherwise. 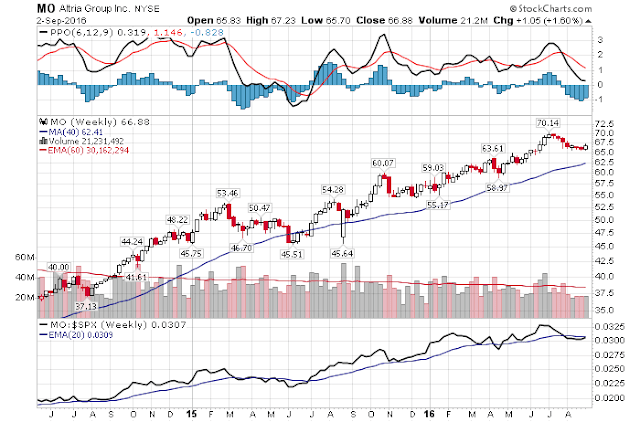 It is also naive to think we all judge others from some universal point of view. Nietzsche talked about the creation of human types over millennia. Max Weber felt that Capitalism was the outcome of the Protestant work ethic and Melville sees it at work in the Quaker Ahab for whom the metaphysics of good and evil underlie his capitalist quest to such a degree so as to usurp the tallying of good and evil solely in terms of money. And now I understand that country club membership and the facades of beautiful homes in enclaves like Annisquam, Massachusetts ,where reality and desire meet, are paid for from dividends from Phillip Morris.